The celebration of the Jujol140 Year will be the great tribute of Sant Joan Despí to the artistic legacy of Josep Maria Jujol. For this occasion, Sant Joan Despí will organize around thirty activities: exhibitions, editorial publications, performing arts shows, school activities, festivals, tourist excursions, gastronomic events … In addition, the city will dedicate to the figure of Jujol a sculpture that will be installed throughout the year 2019. 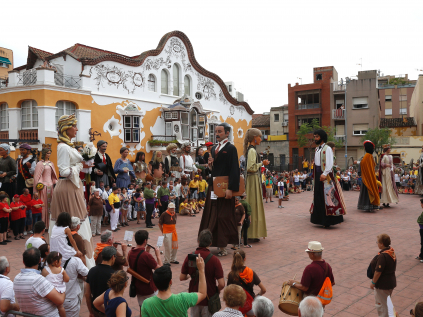 During the Jujol 140 Year, Sant Joan Despí program four exhibitions about the figure, the work and the period in which the modernist architect lived:

• Sample of modernist photographs of the Toshiaki Tange architect’s collection.

• Exhibition of plans and objects of Jujol’s work.

These exhibitions can be seen at the Jujol-Can Negre Center. The first of them, the exhibition of modernist photographs of the Tange collection, will be inaugurated on September 6, 2018.

One of the objectives of the Jujol 140 Year is to promote the international scientific recognition of the figure of the modernist architect. For this reason, Sant Joan Despí will organize the International Jujolianes Days, which will take place in September 2019 and will be the end of the celebration of the Jujol 140 Year. The Jujolianes Days Internacionals will bring together experts in the figure and the work of Jujol and will serve to deepen in the multiple aspects of the artist. In addition, the Sant Joan Despí Town Hall will also convene a scholarship for unpublished research projects on the work of Jujol.

In order to disseminate the figure of Jujol and to deepen his scientific knowledge, Jujol 140 will be publishing specialized publications and also books dedicated to the modernist architect for all audiences.

The restaurants and shops in Sant Joan Despí also join the Jujol140 Year celebration with different initiatives such as the Jujol Gastronomic Days, which will take place from October 4 to November 18th, 2018. Different restaurants will offer their Jujol menus and we can also find Jujol dishes in the bars of city. In addition, the edition of this year of FiraDespí, the trade fair, will be dedicated to the figure of Josep Maria Jujol. Throughout the Jujol 140 Year, cooking demonstrations have also been programmed on the market with the participation of local chefs; a tapas route based on local and seasonal products that will be made in February-March 2019; and dinners in the patio of the Torre de la Creu, every Saturday of May 2019.

The Jujol 140 Year will be a good opportunity for the children of Sant Joan Despí to go deep into the figure of Jujol. During the school 2018-2019 year, the education centers of the city will participate in the realization of an artistic project to around the modernist architect. The figure of Jujol will also impregnate the Edudansa project, which promotes traditional dance in city schools. In addition, the next school year will be organized trips for the students of sixth grade in Tarragona, so they know the footprint of Jujol outside of Sant Joan Despí. For children, an album of chromos on the work of Jujol will also be published.

The programming of the Jujol 140 Year will include different spectacles of music and scenic arts. The buildings of the Jujol Itinerary will be the scene of a musical concert route. One of the most spectacular events will be the mapping that will take place in the fall of 2018 on the facade of the Jujol-Can Negre Center, with the projection of virtual images related to the figure of Jujol, his work and modernism. And in the Torre de la Creu, spring 2019, there will be a show of music, dance and lights. The Jujol 140 Scenic Arts program is completed with the Jujol Young Dance Award 2019, organized by the Asociación DansaDespí with the collaboration of the Sant Joan Despí Town Hall, which will celebrate his tenth edition.

Sant Joan Despí wants to live the Jujol 140 Year in a festive and participatory way. At the end of October 2018 a modernist party will be organized, with a craft shows. The Carnival street of 2019 will be dedicated to Jujol and modernism. Next year, a meeting of giants of modernist inspiration will be organized as part of the Sant Joan Despí’s Festa Major.

The heritage of jujol is one of the main tourist attractions of Sant Joan Despí. Moreover of Jujol 140 Year, a meeting of specialized bloggers will be organized that will make a route for the modernist itinerary. The Jujol 140 Year is also an opportunity to strengthen ties with the rest of the municipalities that host works by Jujol, also the citizens of Sant Joan Despí know the jujolià heritage in other places of Catalonia. Furthermore, cultural outings will be organized in the “Camp de Tarragona” for the public in general and for the elderly of the city.

The celebration of the Jujol 140 Year will impregnate the main city activities over next months. Jujol will be very important in traditional and popular events such as the Spring in Bike, the FiraDespí trade fair, the Carnival or the Edudansa. The figure of the modernist architect will also be the axis of the participation on  Sant Joan Despí in the 2018 edition of the Open House BCN, which will take place on October 27th and 28th, and on the event at the Museums Night 2019.

The Town Hall of Sant Joan Despí has encouraged local entities to join the Jujol140 Year. In May, the Mayor, Antoni Poveda, held a meeting with representatives of the local associative “teixit associatiu” to invite them to propose activities on the occasion of the event and the response of the entities was positive. Some activities that will promote this associative are already know: the traditional Nativity Exhibition of the “Associació de Pessebristes” are going to do a diorama of modernist atmosphere and the “Colla de Geganters” will be in charge of the organization of the meeting of modernist giants of 2019. Over the next months the program of activities of the Jujol140 Year will be expanded with new proposals from the entities of Sant Joan Despí.

Citizens will also be Ambassadors of the Jujol 140 Year and disseminators of the figure and the work of the modernist architect. Over next months different actions of citizen participation will be developed. Among other initiatives, the “Jujol bracelets” will be created, an identifying bracelet of the event with a design that is based on decorative motifs on the facade of Casa Serra-Xaus. This summer, the traditional campaign “Sant Joan Despí a window open to the world” will be dedicated to Jujol. This year, the campaign will invite citizens to take pictures on their holiday destinations with a commemorative flag of the Jujol 140 Year, in order to bring the artist’s name around the world, sharing his photographs at Social Networks. The Sant Joan Despí Town Hall also offers citizens the possibility of joining on Jujol Manifest, which can be subscribed to the Jujol-Can Negre Center.

The Jujol 140 Year has its own website: www.jujol140.cat, where you can find all the information about the program of activities and about the figure and the work of Josep Maria Jujol. The event will also be present on social networks through the profiles @Jujol140 on Facebook, Twitter and Instagram also with the hashtag # Jujol140.